My life long search for a reason WHY I survived after my mother’s death when I was just three months old has been the driving force behind most of the major decisions and changes I have made at every step of my life’s journey.

For many years while back in the place of my birth, Moscow in the former U.S.S.R., I struggled. While working by day from a very young age, I also attended University by night so that I could make something of myself and become “Somebody”.

Eventually, I graduated from Journalism (interesting occupation in a Communist country where freedom of speech didn’t exist at the time) only to find out that the field that I thought would allow me creative expression held no interest or excitement for me, let alone creative possibilities.

In 1974 I emigrated to Canada, at the age of thirty-two, with my seven-year-old son, hoping that a fresh start in a country with freedom of choice and expression would be just what I needed. 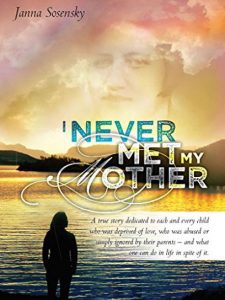 i Never Met My Mother