Born the First Week of the War 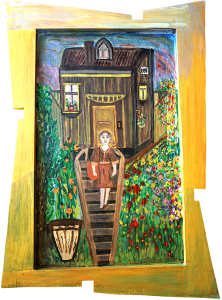 My father had three daughters before me. My father wanted a boy. He told my mother that if she had another girl, he wouldn’t even take the baby home from the hospital.

On June 22nd of that year, Stalin came on the radio and announced to the Soviet people that the USSR was at war. The German fascists had invaded Russia. It was just eight days before I was born when my father was called up to serve in the army and had to leave Moscow. My mother was then left with her two daughters and the new baby, me. What irony. “Another girl!”

During the first couple of months of the war, the citizens of Moscow were in a panic. Word went around that the Germans would take Moscow in no time, and would do terrible things to the people.

My father’s whole family lived in Moscow. He had one sister, who was the eldest, and eight brothers. None of them went to war except my father and his youngest brother Uri, who had no children. Nevertheless, none of them offered to help my mother with her children, so she felt very much alone and in danger. She had a friend in a similar position, whose husband had gone to the front leaving her with their two children, a girl of thirteen and a boy of eleven. The two women decided to leave Moscow before it was too late.

The only help my mother got from my father’s family was through his eldest brother David, who had an important post with the Ministry of Transport. He provided her with access to a railway car, the kind used to transport animals. It was all he could manage since almost all the passenger trains had been commandeered by the army.

The wagon was hooked up to another twenty or more cars of different kinds, carrying animals, machinery, chemicals, and thousands of refugees heading east. The whole railway system was in total confusion. There were delays and long stops, endless days and nights spent on sidings, cars hooked up and then disconnected, sudden changes in orders, trains rerouted at the last minute, and sometimes whole trains literally going around in circles.

My mother and her friend often had no idea where they were going or where they were. It took them more than two months to reach Bugulma in the Tatar Republic, a little more than a thousand kilometres from Moscow. There, they were told they could settle in one of the nearby villages.

My mother became very ill on this long journey and of course, there were no doctors on the train or in the villages where they stopped. The army had called up most of them as well. She was getting worse and worse, and by the time the two women arrived in the village about fifty kilometres outside the city of Ufa, she was in terrible pain and could no longer walk.

Her friend did her best to look after her and all five of the children. As soon as they were settled in the village, she decided to take my mother to the hospital in Ufa but the problem was transportation. There were no cars or trucks, only horse-drawn carts but no horses, which along with nearly all of the men, had been taken by the army. The villagers provided her with one of the carts and also collected a little money for my mother. She started on her journey at about four o’clock in the morning, pulling and pushing the cart by herself with my mother unconscious most of the time. It took them until midnight – twenty hours – to get to the only hospital in Ufa. A clerk at the front desk told my mother’s friend, “No beds!” slamming the little window shut in her face. The poor woman didn’t know where to turn. She offered money to some of the nurses, but they said there was nothing they could do; there were just no beds available. She would have to wait her turn, and the waiting list was a long one. Some people had been waiting for as long as two months she was told, so they couldn’t possibly make an exception for my mother.

What was she to do? Should she take her back to the village and let her die there? She herself was exhausted, hungry and at her wit’s end. Suddenly, an older woman who had been washing the hospital floors and up to now had seemed to pay no attention to this woman with her dying friend, put her mop down and came up to her.

“Listen to me!” she whispered. “Leave your friend here on the floor and go! I’m sure they will find a bed for her. Don’t worry! Just go!”

And that’s exactly what she decided to do. She hung around outside the hospital for a few hours to make sure my mother was taken care of. When she went back in, there was no one in the hall where my mother had been left. Sighing with relief, she started back to the village, pulling her cart the fifty kilometres. Five children were waiting for her and she had to get back to them. She thanked God that her two children were at least old enough to help with the three younger ones.

When she returned, the first problem to deal with was me. I was barely three months old and needed the most care. There were a couple of mothers in the village, breastfeeding their babies. One of them agreed to feed me as well, especially after the villagers offered extra bread and food to help feed her own children. So I was placed with her immediately. One problem solved.

Shortly after that, my mother’s friend walked back to Ufa to see how my mother was doing. She found that she wasn’t getting any better and nobody seemed to know what was wrong with her. On top of that, someone had stolen all her money and so she couldn’t pay for the extra attention she needed. She was, in fact, dying. The two friends had what they knew was to be their last conversation. They talked and cried, and then my mother’s friend had to trudge the long way back to the village.

The next time she went to visit my mother, she was told that the patient by that name had died. Nobody knew anything more than that; not even where she had been buried.

Two other families in the village took in my two sisters.

My mother’s friend never returned to Moscow after the war.